MUSCATINE, Iowa–On Aug. 8, Muscatine Sister Cities commemorated 75 years of peace with Japan following the bombings of Hiroshima and Nagasaki in World War II. The celebration took place at 7:02 p. m., the exact time in Japan (figuring in the time difference) that the atomic bomb dropped in Nagasaki. 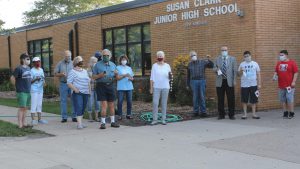 Muscatine residents gathered for the Sister Cities Bell Ringing in honor of 75 years of peace with Japan Aug. 8.

John DaBeet, the event’s organizer, shared that Muscatine held their celebration in solidarity with their sister city Ichikawamisato in Japan. “The idea came from Sister Cities International in Japan; they thought it was a good idea to ring bells,” he explained.

The event happened outside Susan Clark Junior High School (formerly West Middle School). DaBeet selected the location to highlight the student exchange Muscatine’s middle schools have had with Japan for many years, with local students visiting Japan one year and Japanese students visiting Muscatine the next. “The reason we decided to go with this place is because Susan Clark Junior High School has a student exchange with our sister city Ichikawamisato,” he said.

About 15 Muscatine residents attended the bell ringing ceremony. Taylor Wettach, a graduate of Muscatine High School who now lives in New York, shared that he attended the bell ringing because his experiences in Muscatine Community School District led him to go on a trip to Japan, which proved a very positive experience. Wettach attended a College 4 Kids class taught by a teacher who had traveled to Japan. This inspired him to go on the Japan exchange trip himself, allowing him to learn about the country and its culture first hand.

Muscatine resident Jean Clarke also spoke, sharing how moving an experience visiting Hiroshima proved for her. She felt glad that Muscatine chose to have a bell ringing celebration similar to one she and her husband had attended in Des Moines several years previously.

At 7:02 p. m. the assembled rang their assortment of jingle, cow, and other sorts of bells for a full minute. They hoped the evening’s ceremony would celebrate not just peace with Japan for the past 75 years but a peaceful future as well.